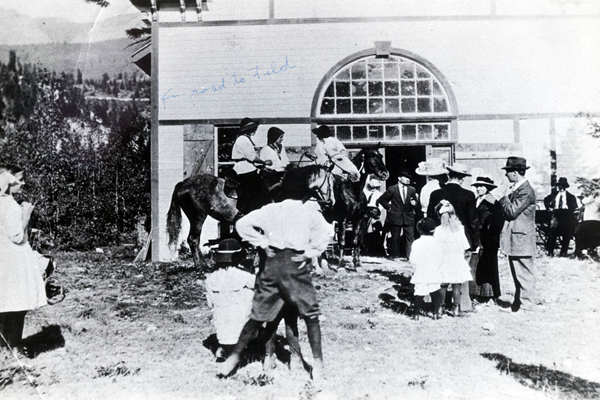 Competitions Attracted Spectators in Golden, BC

The people of Golden, BC were always up to a challenge. Be it foot races or fall fair events everyone took part. It makes sense then that local horse owners used deserted town streets to challenge each other to a race. Horse racing grew and soon competitors came from out of town to challenge the locals.

Time to Build a Track

Finally the sport had grown to a point where they were going to a need a track in order to accommodate all the entrants.

Fred Johnson was the successful bidder on the tender to clear the area where the track would be. The site was where the present high school is located. The track was surveyed by F.W. Aylmer and much of the work was carried out with volunteer labor. Once the track was in good order the race day was announced in the local paper and news traveled even further afield.

The races generally covered two days and it was accepted that these would be holidays for the townspeople. Local businesses decorated with banners, flags, and signs. Many businesses participated by donating gifts to be win or raffled, or by donating money for prizes.

In June of 1893 the races were held on Monday and Tuesday. Horses were entered from Golden, Donald, Field, Beaver, Calgary and many from up country. In 1893 two promising horses were brought from Calgary and great things were expected of them. They proved unequal to the task set for them by such horses as Big Enough and Fitzroy.

The first event of the day was the Saddle Horse and after three heats the winners were, in order of their win, Dainard’s Kicker, Geary’s Billy, Geary’s Buck and Low’s Baldy.

The Track was Attached to the Fair Grounds

It’s very hard to imagine such a thing taking place in Golden but we had a beautiful race track attached to the Fall Faire Grounds. The next event was a foot race between some of the faster runners in Golden with Sweeny first and McIntyre second.

This was followed by the 440 horse race, a men’s 150 yard hurdle, the wheelbarrow race and standing high jump. Next came the girls race, boys race, and then the cigar race. The cigar race was truly and interesting race as the rider was given a cigar and a match. He had to light his cigar, race the distance to the line, get off the horse and lead the horse while he ran, back across the line while keeping his cigar lite.

All Finished Off By A Grand Ball

A dress-up ball was the icing on the cake. The ball was held in the Alexander Hall with a large turnout. The floor was prepared for the dancers at 10 p.m. and they danced to the band from Calgary until 2:30 am. After 2:30 am music was supplied by Mr. Rumbold up to the early hours.

These race days continued for many years and the area was soon a popular one for all kinds of events. In 1895 grandstands were added for the comfort of the spectators as well as some booths for games of chance, games like Crown and Anchor. In 1913 the Golden Agricultural Association called for tenders for the completion of an exhibition hall.

Completion of the building meant that the area was truly multi-use as the fall faire could be held in the same area.

World War One Brought An End to the Races

Unfortunately the advent of the first world war saw deterioration of these facilities and soon they had to be removed.