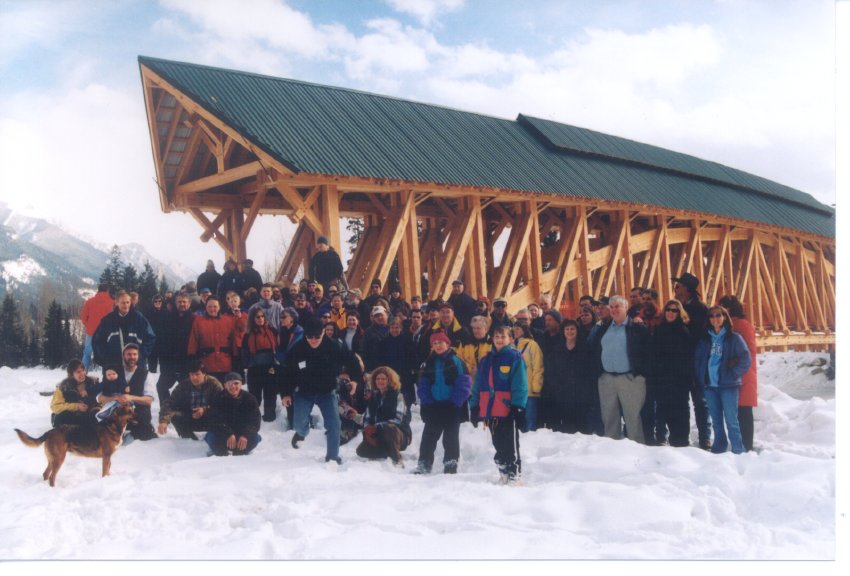 After several years of discussion, a design proposal for the timber frame Kicking Horse Pedestrian Bridge was brought to council in January 2000. The bridge would enhance the visual appearance of the downtown area, create a destination piece and extend the existing trail system.

The logistics for the project were huge. Who would build it? The Timber Framers Guild of North America, together with volunteers from the community. If all of these volunteers were coming from all over the world to work how would we feed and house them?

In the summer of 2000, an open house was held to give residents the opportunity to have a look at three different plans and have a say on which bridge best suited Golden. It was determined that a timber frame structure would be built.

“It’s going to be so exciting,” said Lee Malleau, economic development officer. “It’s an event that will really bring the community together.”

The bridge carries a price tag of $450,000 for its burr arch design which the community opted for during an open house July 19.

Along with the town’s contribution to the project, the province of B.C. gave $125,000 through two grants, and the Columbia Basin Trust (CBT) has committed at least $44,300 for the project.

Another $155,700 has been accumulated through gifts-in-kind and there is the possibility of further funding from the CBT in future years.

The project did not come off without its fair share of protestors. Not everyone thought the location chosen was ideal. Some thought that it would welcome unwanted traffic or late-night bar antics to their neighborhood.

Urban Systems, the engineers and planners hired to find the final location for the bridge, shared their rationale for choosing the existing site. It was the best connection between downtown and the residential areas on the south side, this was also the narrowest point in the river. The bridge was to be a destination so it must be visible to traffic.

“The Timber Framers Guild is a non-profit, educational organization of men and women who share a common interest – timber framing.

They host international and regional conferences, and sponsor workshops for all skill levels, community service events, and adventures all over the world.

The timber framers are building a Burr arch bridge for Golden, likely starting in September.”

The Town of Golden contributed as did the Columbia Basin Trust. Tembec Forest Industries, Canadian Timber Frames, and Louisiana Pacific all donated wood to the project. Other local businesses and individuals donated food and shelter for the Timber Framers and other volunteers from all parts of the world to help make this project a reality.

The Golden Rotary Club sold wooden pegs to the public, who could put their names on the pegs. The pegs were then driven into the bridge to pin the parts together.

Bridge Draws Volunteers from Near and Far

“There’s no turning back now. Golden is getting a wooden, covered pedestrian bridge that’s expected to last into the next century.

“This will bring the two sides of our town together,” said Mayor Red Scott. The mayor said he feels Golden has an identity as a logging community and the wooden bridge recognizes that heritage.

Dozens of local volunteers have already contributed many hours to the project, in various ways. “It’s drawing the community together,” said Scott, adding the bridge will also draw visitors to the area.

Preliminary work on the bridge was begun on Aug. 19 by about 20 members of the Timber Framers Guild of North America. At least 50 more are expected to arrive this week.

Most of them are coming from across Canada but there are also several Americans on the crew, from Illinois, Maine, Colorado, California, New Jersey, and West Virginia. One guild member is from as far away as Sweden and he brought his girlfriend with him. She, too, is lending a hand with construction.

Another guild member, Christophe Loesch, is from as close as Golden and there are a couple of them from Calgary.

David Crocco, a timber framer from Ridgewood, New Jersey, is the only casualty so far. He broke his heel on Aug. 30 when he fell off the bridge frame and broke his heel bone. The retired attorney was one of the first crew members to arrive in Golden. Since then he and his fellow framers spent two days setting up the “workbench,” on the north side of the river’s edge, anchoring it to the road with rebar and ensuring it was exactly level.

Supporters and sponsors of the bridge have been supplying meals to the workers; several Rotary Club members have shown them hospitality. ‘”They’ve been very kind to have invited us into their homes when we were filthy dirty because we had not had a chance to change our clothes,” said Crocco.

Starting this week, however, the construction crew will be fed breakfast and dinner at the civic center while lunch will be brought to the site, supplied by local businesses.

Golden’s free-span timber bridge will incorporate a burr arch design and measure 150 feet across, weighing 120,000 pounds. It is to be installed on its abutments next weekend. During the following week, timber framers will be adding the finishing touches.

The project met with much opposition in its planning stages, marked by several vocal delegations at council meetings and delays caused by engineering difficulties as well as denied funding. but it’s full steam ahead now.”

The Bridge is Complete

The weather hampered the final placement of the bridge. The weather which turned unseasonably warm meant that the bridge couldn’t be placed in its final location because the water came up. In order for the bridge to be placed the river had to be at a level low enough to build a pier in the water that would hold the bridge as it was moving.

The roof was yet to be completed but the structure was finished. While they contemplated whether or not to bring a crane in to make the move an opening ceremony was held.

Several speeches were particularly moving in light of the attack on the U.S. that occurred on Sept. 11. Beneath the Canadian and American flags, speech-makers noted the symbolism of a bridge between two countries.

On Thursday, October 25, 2001, a celebration was held at the edge of the river as the bridge was finally set into place. The celebration recognized the herculean efforts of everyone involved to make the dream a reality.