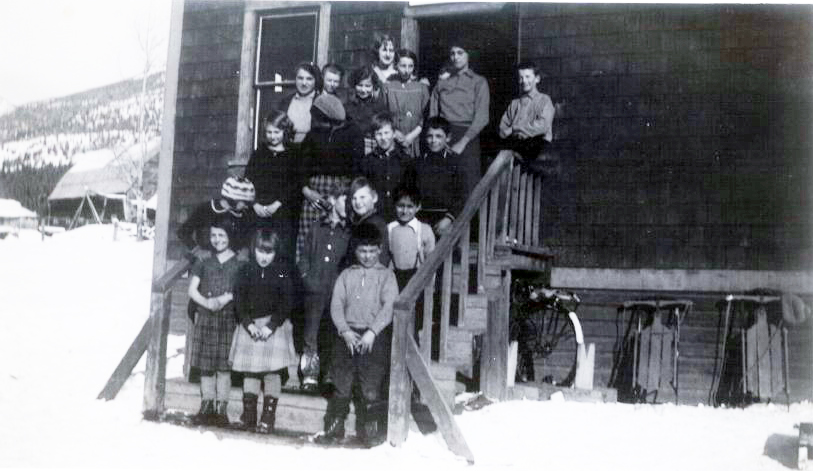 The air is crisp and the mornings foggy which means that school in School District #6 is back in session. Here is some information for one of the almost forgotten schools in the district near Golden, BC.

Horse Creek School was at Nicholson, BC. Classes at Nicholson were originally held in a bedroom at Nicholson’s home. Seven students were in attendance there during the construction of a proper school that was being built on property donated by the Nicholson family. The first teacher in this school was Mr. Orchard and he was followed by a string of teachers including (but in no particular order) Miss Appleby, Miss Cooper, Miss Honey, C.H. Skelding, J. Barker, Mr. Richardson, Miss Barclay, Miss Durham, Miss Reilly, and Miss Hamilton.

The school consisted of one fairly large room and frame construction. It was painted brown on the outside and had fairly large windows that covered, most of one wall, with just a few on the opposite wall. Inside at the front, the wall was covered with a blackboard. The teacher’s desk sat prominently at the front. This school, which had originally been built to house 15 students, often had as many as 30 with very little room left to move around.

At the back of the room on one corner was the big black stove, common to the time. Built of cast iron it had a big drum-like shield to protect the children from burns. The wood to feed the hungry beast was brought by contract and according to the 1924 school records, Norman Habart was paid $30. to provide the school with 10 cords of wood.

In the other corner at the back of the school was a book cupboard and a washstand. The washstand held a bucket of drinking water with a dipper, a washbasin and soap, and a towel. One of the boys was usually assigned the task of keeping the bucket full of water. As the building had little or no insulation, the water pail would have ice on it in the colder months.

The floor of the old building was made of wood. Once a year it was oiled to help preserve the boards, keep the dust down and make it easier to clean. After many of these oiling, the floor of the Horse Creek School was a warm dark brown.

“The cloakroom at the entrance was not heated when lunchtime came our lunches were frozen. We carried our lunches in lard pails. Lunches consisted of: brown sugar and butter, honey, jam, fish or meat sandwiches, a banana, orange or apple were a treat.” Eve Gisborne

Outhouses and Other buildings

The outhouse and a woodshed made up the remainder of the building a Horse Creek School.

“There were a couple of outhouses, “one holers”, behind the school, if nature called we raised our hand to leave the school.” Eve Gisborne

Many of the children who attended classes at this school walked up to six miles to attend, although the average was three miles. Children who loved across the river used the CRL trestle in the spring and summer and in the winter when the river froze they would shortcut across the river ice. Some of the families in the area who used the Horse Creek School were: Gottersons, Flemstroms, Fransons, Alfanos, Pagliaros, Bradshaws, MacBeaths, McNabs, Smiths, Kallmans, Jones, Philbergs, Williams, and Almbergs.

“I officially started school when I was six years old. In summer we walked three miles to school over a railway trestle that spanned the Columbia River, where the Nicholson Bridge is now. In the winter, we crossed the river below our house on the ice, which cut two miles off our walk.” Wilfred Habart

Jobs at the School

The school board paid someone $10. a year to light the fires in the morning and the same wage was paid to the person who performed the janitorial work. In the records for 1924, the teacher was paid $28 and $6.32 was sent to the teacher’s pension fund.

Closing of the School

Horse Creek School closed in 1947 when the school board bought a bus to move the students to Lady Grey School.

“Today the one-room rural school with its gas lamps, wood stoves, overheated lunches in summer, frozen lunches in winter, its good, bad and sadness has faded into history”. Wilfred Habart