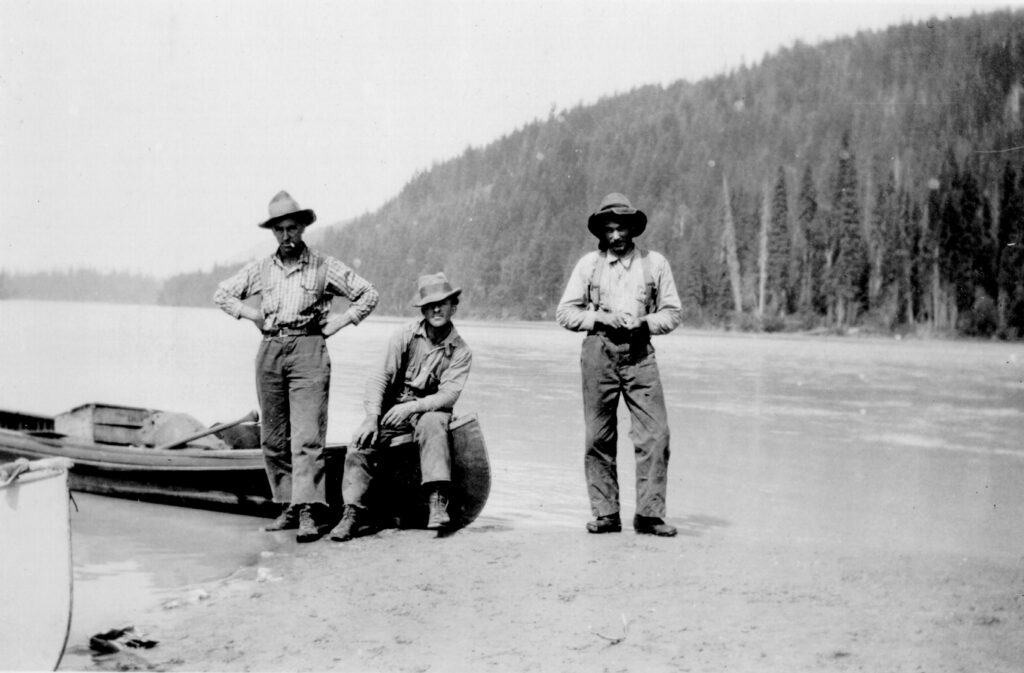 When Canadian Pacific engineers faced the frowning heights from the junction of the Kicking Horse and Columbia rivers they had a choice of two paths. They could have sighted their transits north and followed the natural path which the Columbia had been carving through the range for uncounted millions of years, a path roughly 200 miles between the points that were to become Golden and Revelstoke.

They chose the alternative path, a climb of 5000 feet through Rogers’ Pass and a saving of about half the mileage of the water grade. Afterwards they tunneled right through a mountain to make a shortcut.

The engineers who were bit by bit filling in the gaps of Canada’s transcontinental highway came to the Selkirk barrier they had elected to follow the path of the Columbia. After years of work and years when the thinness of the national purse almost halted progress, this last link in the highway remains unfinished.

But the work goes on.

The Big Bend of the Columbia forms a rough triangle with a baseline between Golden and Revelstoke. It’s apex is to the north, where mountain torrents of Wood and Canoe rivers rush to join the Columbia on its white-capped passage to the Pacific.

As the road stands today the eastern leg of this triangle is practically finished, at the apex will be opened with the completion of a bridge this year.

On the western leg of the Bend 300 men and a number of heavy power-shovels are working. There was an old wagon road some distance northward from Revelstoke for many years. It is possible today to drive your motorcar northward approximately sixty miles, and for some distance this road is a standard-width national parks highway. Over a distance of forty miles, being survey this season, new construction is necessary.

When will the Big Bend be finished?

Talk to the enthusiast in Revelstoke or Golden and he will tell you 1937, but when you consider that there is forty miles of new construction to do and many miles of widening and revision on the southern end of the western leg, it is hard to see how the work can be finished in less than two more complete seasons.

When it is built it will be a real highway, a road of long tangents, easy curves and kindly grades.

Man has known the Columbia for but a brief fraction of its age-old life, but that little span has been crowded with drama, death and comedy.

Drive north on the Big Bend from Revelstoke, as a Province representative did the other day. You pass the shack where Sluicebox Pete ended his days; you look down into the arid depths of Prohibition Gulch; the car rattles over the planked bridge at LaForme Creek, a name that recalls a Frenchman who was caught there by winter snows and survived by eating his horses. Death Rapids, Priest Rapids, Big Eddy Creek, every name suggests a story.

Death Rapids took their name when that treacherous water claimed its first white victims in the persons of men who travelled down with Ross Cox in 1817. A boat capsized and seven men were swept down the raging stream.

A party of Roman Catholic priests were sucked down by the whirlpools just below and the name Priest Rapids came into being.

In the season of 1933-34, certainly not a boom year, nearly 40,000 cars entered Banff and Yoho national parks. Most of them made the circle that brought them through Golden.

At the present time between 80 and 100 cars are being shipped by CPR between Golden and Revelstoke each week. Drivers are keen enough to continue westward to spend time and money making the passage by railway ferry.

Posted in Golden Events and tagged Donald BC, Golden BC
← Countess of DufferinEdelweiss Swiss Village →
Scroll To Top