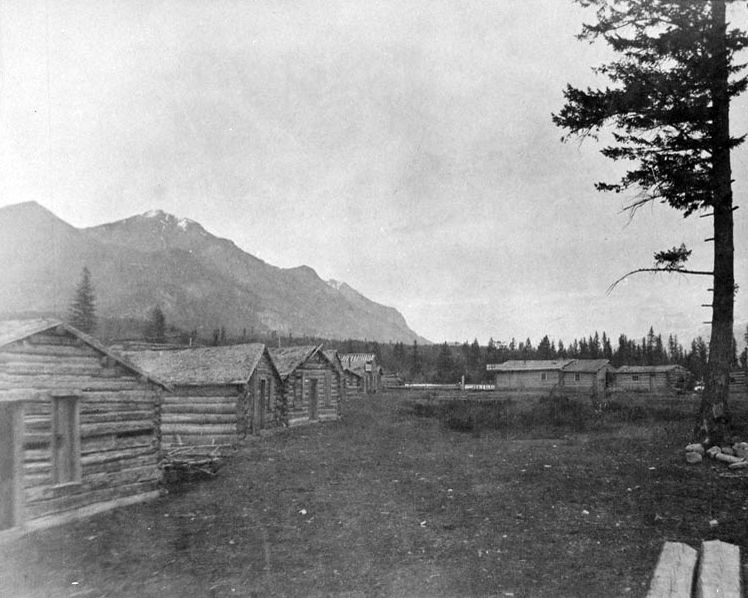 During the construction of the C.P.R. west of the summit of the Rockies, during the years 1884 and 1885, it was first intended to locate the divisional point at the junction of the Kicking Horse River and the Columbia. This caused a tent town to spring up at the point during the summer of 1884, before the railroad reached here. This settlement was then known as Golden City, going one better than the dethroned Silver City at the summit of the Rockies.

Upon investigation, it as found, that owning to the low level of the land along the river, it was subject to flood by reason of ice jams in winter; and, therefore, the cost of building a foundation for a divisional point would necessitate large expense. Consequently, it was decided to establish it at the first crossing of the Columbia River, about 16 miles west, and this location was christened Donald after Donald A. Smith, later Lord Strathcona.

Here James Ross, manager of construction, had his headquarters during the latter part of 1884-1885. Donald was purely a railroad town, and, as usually happened in the days of mountain construction in the United States, the divisional points were somewhat wild and woolly, owing to the amount of work required, and made it necessary to employ a larger number of men to the mile than on the prairies, and the work continued for a much longer period.

There were over a dozen saloons in town, a music hall with a crowd of girls who had been brought from England to entertain the ever moving crowd.

The construction of the railway was concluded in November 1885, and by this time, Donald had settled down more or less, but it again became active in 1886-7 during the construction of the snow sheds on the railway. However, at no stage of construction did the bad element get any great control, because the enforcement of the law was in the hands of the North West Mounted Police under the command of Inspector Steele. The force was tolerant up to a certain point, but when a red road with a business-like revolver came in the view, and, backed by the Dominion Government, gave orders, it was invariably obeyed, and failing this the culprit would be locked up. Considering the number of men of different nationalities to be controlled, it is remarkable how seldom serious crimes occurred.

One occasion only, was the force really tested. This happened when the end of track was at Beavermouth, 12 miles west of Donald, in the winter of 1884-5. Some of the Donaldites were following the crowd, and the railway company at the time was so hard pressed financially that payment to contractors was in arrears. This resulted in a strike of a large number of men in the vicinity and they congregated at Beavermouth. The Police Camp was on the other side of the Beaver River, connected with Beavermouth by a bridge.

The force then at the camp consisted of Inspector Steele, Sergeant Fury, and about six or seven constables. While patrolling among the strikers, Sergeant Fury and a constable came in contact with a sub-contractor named Behan, who was apparently inciting the men to resist the police, and Sergeant Fury promptly arrested him. While taking his prisoner to the Police Camp, the crowd tried to force this release; Sergeant Fury immediately shot the man who made the attempt and was then able to go on. In the meantime, Inspector Steele and all the other constables had arrived at the camp end of the bridge, with Winchester rifles, kneeling ready to fire. The Inspector sang out that the first man who stepped foot on the bridge would be killed, and while there was a lot of encouragement from the men behind, those in front did not, under the circumstances, show any interest in attempting to visit the opposite side of the river, and eventually took the back track. The Mounties got their man, and peace ensued.

Donald was only a village of probably three hundred people so far as the permanent residents were concerned, but there was always many floaters. The land in the vicinity was of little value of agricultural purposed, so that the few merchants in the town had to depend entirely on the resident railway employees for business. In 1897, operating conditions changed, and the divisional point was moved to Revelstoke. This was the end of Donald, and, in 1900, all the residents left town, the railway men going to Revelstoke and most of the others to Golden, which had come into being, on a beautiful townsite some 17 miles south. To this point the Court House was taken, the Episcopal Church still further to Windermere and the other buildings privately owned, to different points at the Railways expense. Nothing but a memory remains of the town of Donald.