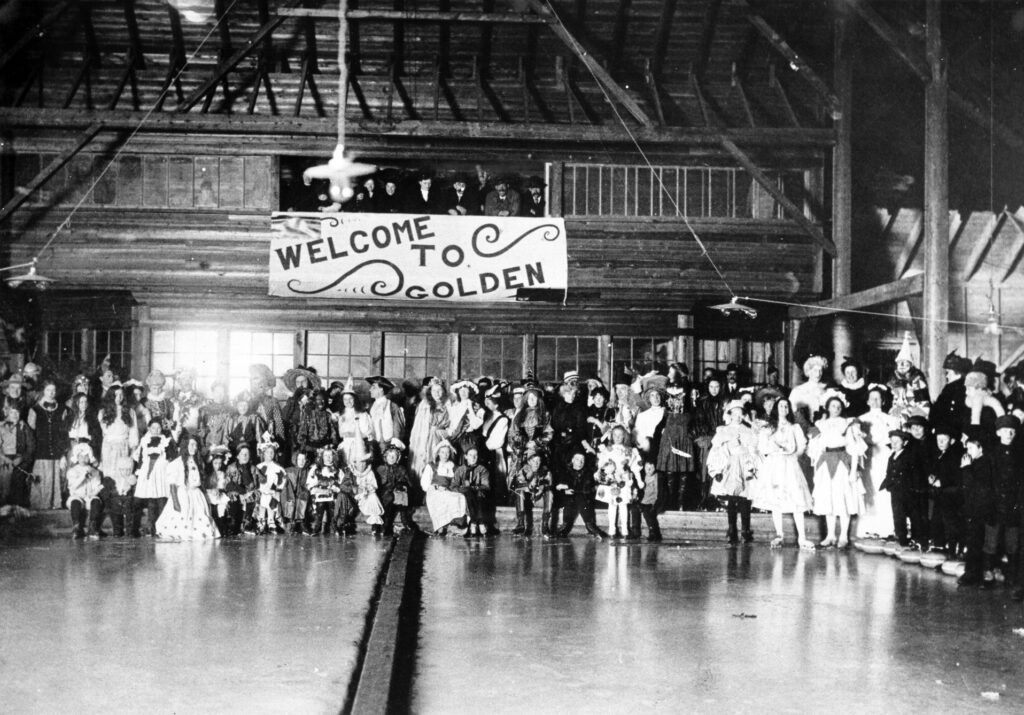 From the book titled “Kinbasket Country” the story of Golden and the Columbia Valley, comes a look at some of the old-time recreation that took place in the valley.

Since the early days, Golden has been a great place for recreation of all kinds. When the C.P.R. began its transcontinental passenger service, entertainers of many kinds began to use the railway to bring their programs to many small places across the country.

Golden soon became a regular stopping place for such diversions as minstrel shows, ventriloquists, harpists, midgets, magicians, plays and bands. There were dances in the large hall of the Columbia Hotel, amateur theatricals and many sports, both in summer and winter.

Curling was perhaps the first organized winter game, dating back to the early 1880s. After a couple of seasons, they built a rink of frame construction and later a much larger building to house two rinks and ice for skating. This impressive structure, built by James Henderson in 1898, at a cost of $2,500, had the rinks at the two sides and skating space in the center.

Hockey could be played with wire netting around the rink. This was not satisfactory, so a lean-to was added at the end so the skaters could circle around the rinks, now located in the center, and hockey was dropped. Golden can truly boast of having possessed the first curling rink in the province, and local curlers have played in competitions in Calgary in addition to many places in British Columbia.

They have hosted many bonspiels, all on natural ice, in this venerable old building.

When the Centennial Arena was constructed in 1967, a section was added for curling and all ice sports could be enjoyed in this new structure in the Golden Community Park.

The sturdy old curling rink was finally demolished and burned, but its memory is still alive in the minds of many of today’s older curling enthusiasts. Other sports were soon on the go and while dates are hard to determine, there are a number of old photographs of teams of players of the early days of football, basketball, baseball and even cricket, in the possession of older residents.

Some of the most vivid recollections of our senior citizens are of horse-racing in the park. A racing stable once stood there and thoroughbred horses were brought in from Calgary, Spokane, Invermere, and Field, among other places.

The race course then was later the roadway which encircled the ball ground. It is still traceable but has partly been absorbed by the enlargement of the ball fields (and now the high school.)

Horse-racing was tremendously popular and many local youths became willing helpers, grooming and feeding the horses and riding them for exercise with great pride. These horse races drew big crowds, for everyone seemed to either ride or drive these useful animals, the only means of transport on trails and early roads.

At different times, Golden boasted tennis courts of clay and gravel in several locations, and there was once a grass court at a private residence. A tennis club operated two courts in the hospital property adjoining 9th Street and for a time, the game was enjoyed and Saturday teas were popular with the players.

Boxing and wrestling matches were staged in the old curling rink in the off-season, but as soon as it was warm enough, outdoor sports took precedence.

In the early days Captain Armstrong would sometimes take the school children for a boat ride and picnic on a fine summer day and often there was dancing for the adults on a scow pushed by one of the paddle-streamers, with music provided by a local band.

In September, an Agricultural Show was held in the park with prizes for the best showing of horses, dairy and beef cattle, goats, pigs and chickens. A large building housed the garden produce, home canning and cooking exhibits.

Winter had its fun for the children, some of whom had dog teams. One enterprising young girl would drive from Nicholson to Golden and back to visit her relatives, pulled by her faithful dog. Snowshoes were used for outings as well as for trapping before skiing became popular.

The first Ski Club was organized in Moberly and often a number of Golden skiers would join the rural children on a very small hill by Galstad’s Lake. Before the side roads were plowed and sanded, the road leading down to the highway made a wonderful run at the end of an afternoon of skiing. From this start the Golden skiers came into existence, and better hills were found; first at Morris’s farm and then on slopes down from the vicinity of the graveyard to the shooting range beside Reflection Lake. As the club grew, the ski slope and tow on Mt. Seven was developed.

Badminton was played in the former Methodist Church Hall, despite the court being a few feet short of regulation size. The game was dropped when this building was demolished but the construction of the Civic Centre gave this game a new lease on life, and as bigger schools were needed, their gymnasiums gave students an opportunity to learn the game.

The Civic Centre was built by volunteer labor, using huge timbers taken from the old mill as supporting beam. Its completion gave the townspeople, once more, a large meeting hall for dances and other entertainment, something which Golden had lacked since the destruction by fire of the Columbia Hotel and the Lyric Theatre.

The Lyric Theatre was a pretentious building seating 309 persons and it was built in 1911 adjoining a Barber Shop and pool hall. This was the time of the silent movies and Miss Yvonne Mercier played the piano during the showings.

Above the pool hall and Barber Shop was a hall used for meetings, school Christmas concerts, card parties and dances. When it burned in 1929, it left a gaping hole – the cement foundation – as a reminder of its former existence. It is commemorated today by the Lyric Apparel ladies wear shop in the Gareb Block, built in 1964 on the: former site of the Lyric Theatre.

Until the construction of the Yoho Theatre, films were shown in the old boardinghouse on 14th Street, demolished in 1971. As in other places, the cinema has largely replaced live entertainment such as drama and music and social events have given away to the television set.

Fortunately, the formation of school bands is having the effect of reviving some of the former active participation in music and the creative arts are receiving encouragement through the activities of the newly formed Golden District Arts Council.