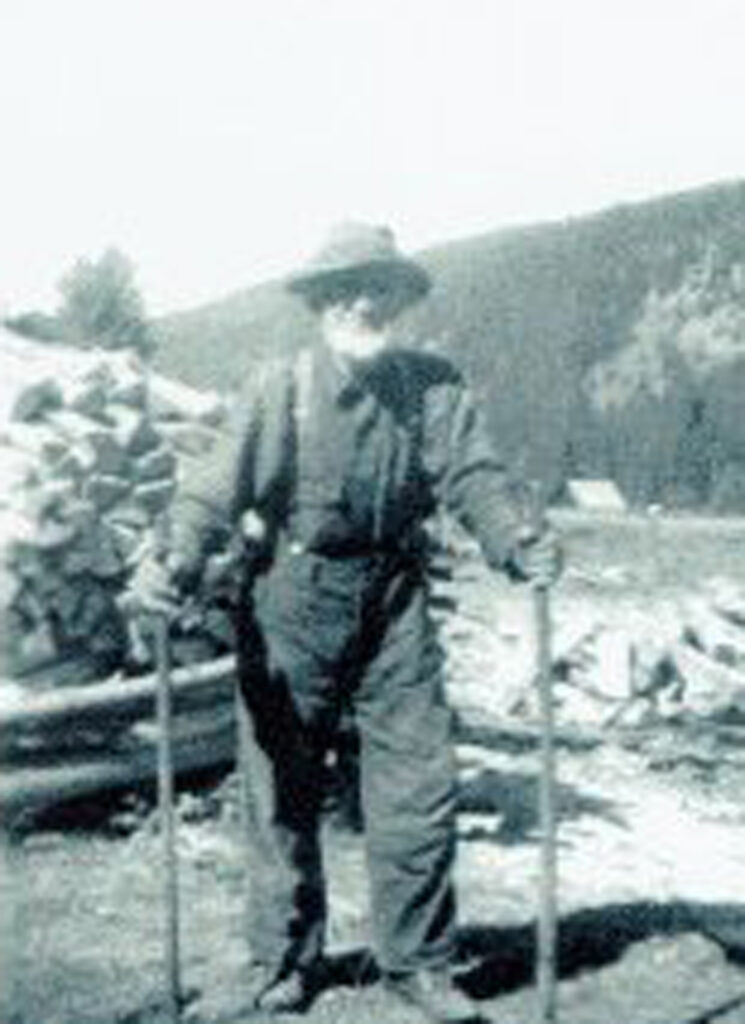 Charles Percival Price was one of thirteen children raised in Colorado City. Times were hard, and it was necessary for the children to leave home as soon as possible. Price was one of the elder children and was soon bitten by the gold rush bug. He eventually ended up living here in the valley in a little shack at Beavermouth, BC.

Other’s who knew “Kid” well say that the gang was none other than the famous Jess James gang. The history books say that Jess James, his brother Frank James, Coleman Younger and others formed a gang in 1866 and spent the next 16 years robbing trains and banks in the Midwestern United States. There are a couple of lists of members of the gang found on the internet but Price’s name doesn’t appear in them.

“Kid” Price came to the Columbia Valley in the spring of 1883. So the timing makes it possible that he truly was a member of Jesse’s gang.

“Kid” once again went back to prospecting, taking up a claim on Bush River called “Excelsior” and one on the Columbia River at the Big Bend called “Whistler.”

He led quite a lonely existence and only came in to town if it was absolutely necessary. He made many friends over the years who would stop by his cabin and stay for a visit. He was very closed mouth about his past and wasn’t ready to tell anyone how he came to have the name “Kid.” Finally the shack became too run down and “Kid” was getting on in years, so he moved to Victoria.

The Star dated September 6, 1958, tells the story of the “Kid” at 100 years old, meeting his 92 year old sister for the first time in 81 years. His sister thinking him dead sent a letter to the postmaster of Beavermouth asking for information about where the “Kid” was buried. The letter was forwarded to Price himself, who responded with an invitation to visit.

In his own words “Kid” said, “I came here in 1883 and went prospecting around the Beavermouth and Golden. I think they thought I was an American spy, so, in 1889, I fooled them – I took out Canadian Citizenship papers. I’ve lived in BC ever since and it’s the best place in the world. I’ve grown old with the province and I’ll stay here till I die. My grandmother lived to be 115 years and I may beat her record yet. I never refused a drink in my life and I used to smoke. I’ve broken both of my legs and my hip bone at different times.

It could be that Charles Percival Price was a member of Jesse James gang. He certainly was a very happy man who was content to live a simple life in a time much simpler than today.

Posted in Uncategorized
← First Airplane over the Canadian Rockies Crashes in Golden, BCCaroline Bergenham – Art by Correspondence →
Scroll To Top