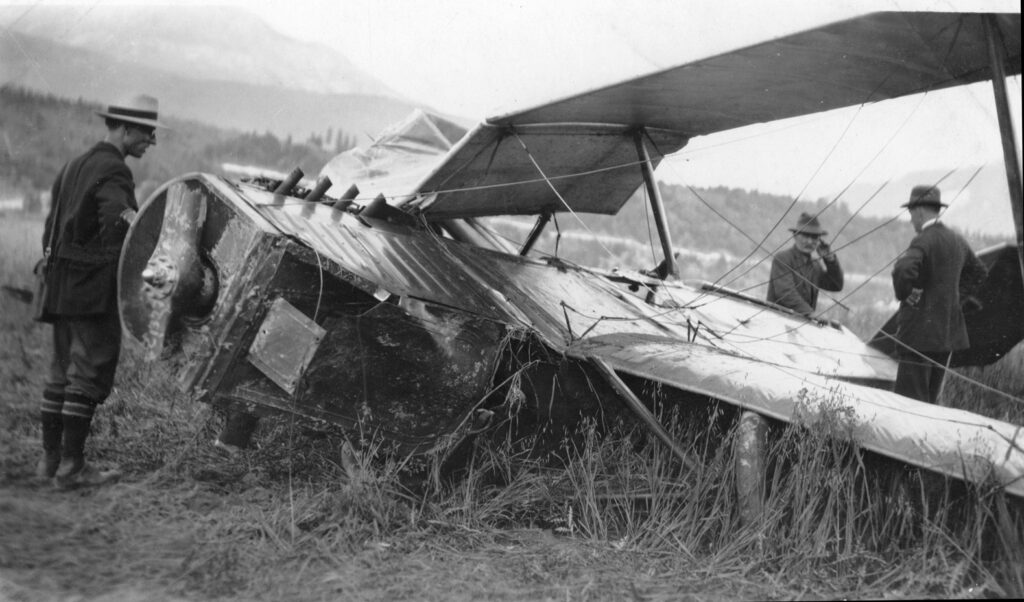 Ernest Hoy was born in Dauphin, Manitoba but during his childhood, his family moved to BC. Where he lived in Kelowna and Vancouver. He enlisted during the First World War and went overseas where he transferred to the Royal Air Force in 1917. During his time overseas he was forced to land behind enemy lines and spend two months as a prisoner of war before the Armistice was announced. He was awarded a Distinguished Flying Cross at the conclusion of the war. This award was given to only 193 Canadian’s during the First World War. The cross is awarded to officers and Warrant Officers for an act or acts of valor, courage, or devotion to duty performed whilst flying in active operations against the enemy.

When he returned home Captain E.C. Hoy became a member of the Aerial League of Canada. The league, in company with the “Lethbridge Herald”, “the Calgary Herald” and Vancouver’s,  “The Daily World.” This group offered $1,000. to any airman who could fly the Rockies in 18 hours. Their reason for trying this out was to see if they could the time that it took to get the news from Lethbridge to Vancouver. The railway could do it in 25 hours. Many airmen came forward to apply, so many in fact that they had to draw a name from a hat, and Hoy was the winner.

The airplane that he was set to fly was a Curtiss JN-4 90 horsepower biplane. It was an open cockpit two-seater with a twenty-four-gallon fuel tank. They determined that 24 gallons were not enough to make the first leg of the journey so a second tank was put onto the front seat of the plane that held an additional twelve gallons.

The journey was scheduled to take the airman from Vancouver to Vernon, Vernon to Grand Forks, Grand Forks to Cranbrook, Cranbrook to Lethbridge, Lethbridge to Calgary, in one day. The rest of the trip would be completed in few days. They did this because of darkness. The pilot couldn’t fly in the dark as they can today. This only navigational tools were a pocket watch and a railway tourist map of the mountains.

The journey began on August 4, 1919 in the wee hours of the morning but was soon turned around because of bad weather and water in the carburetor. A second attempt was the successful on August 7, 1919. Aboard the plane with him were letters of greeting from Vancouver’s Mayor and council to each town that he would stop at.

It was a perfect day when the pilot wearing goggles and a leather helmet reached the plane’s maximum height of 2000 feet. This allowed him a direct flight to Vernon.

He was greeted at each of the stop by big, enthusiastic crowds of people and airman who made sure that his needs were taken care of. He successfully delivered his letters along the way. Vernon, Grand Forks, Cranbrook, Lethbridge and with night falling he landed the plane in Calgary’s Bowness Park using the headlights of cars to light his way. He rested there for a couple of days and on August 11, 1919 carried on – preparing to finish his journey.

It had been planned that he should land at the old race track, where the present high school is located but upon seeing it he believed the area was not big enough so he flew across town to a big field owned by local Thomas King. He executed a perfect landing, got off and had lunch, visited, left his mail and newspapers, and picked up copies of “The Golden Star” and after a final farewell to the crowd, he prepared for takeoff. While attempting to lift off the plane’s wing struck the ground and crashed.