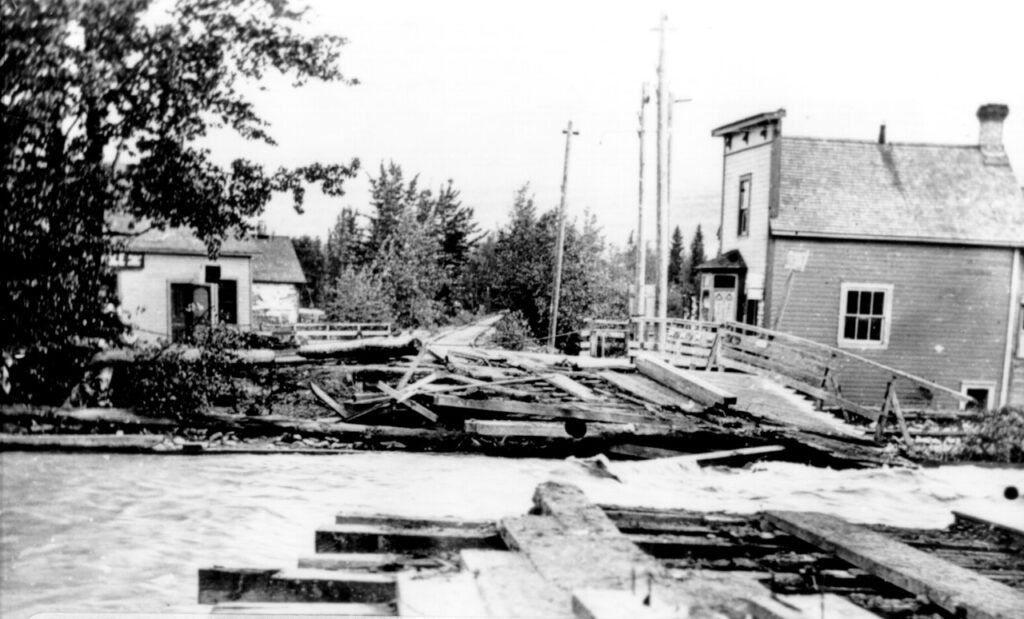 In the next few days, it appears that Golden can expect some spring rainfall and with that, the rivers rise and people start to worry about flooding.  The following is from the Golden Star – June 22, 1916, and talks about one of the worst flood seasons we ever experienced.

Worst Flood Since Eighty-Four Plays Havoc with C.P.R. in Canyon, Carries Away Bridge Span and Inundates Southern Portion of Town

Predictions were realized on Monday morning when the Kicking Horse threw up its heels and went on a rampage that has demoralized traffic on the C.P.R. For several days, flooding tied up the Kootenay Central Railway, and wrought considerable damage to Golden. The sum total of this damage amounts to flooding many cellars, ruining gardens, and in some cases damaging dwelling houses. It also carried out the south span of the railroad and traffic bridge, weakening the north approach and pier of the K.C.R. steel bridge.

That the damage to the town and bridges was not greater is due to the herculean efforts of the workmen of the C.R.L. Co and individuals who volunteered assistance in keeping the immense mass of drift logs from sweeping the piers from beneath the bridges.

While the blow was sudden it did not catch the railroad entirely unaware. Within a few hours after traffic was interrupted crews were on the scene and began the battle with the torrents.

One of the worst problems that confronted the division officials of the C.P.R. is the washout a mile east of Cloister, where a hole some 20 feet long was torn beneath the rails.

Seven train loads of rock were carried to the scene of the damage and while much of it went to reinforce weakened fills, a goodly portion was cast into the hungry maw of the river, at the break, to be carried away like pebbles.

Crews labored on anchored booms, toying with death every second to secure a foundation that would permit rebuilding the fill in the hope of releasing the two passenger trains held at Glenogle.

This was accomplished Wednesday afternoon and the first train reached Golden at 19:00.

Further east the damage was equal if not worse. A pier of the long steel bridge east of Palliser was undermined and the bridge tilted to a dangerous angle. The long fill at Palliser was badly damaged, and many other fills weakened. The creek at what is known as the McKay slide again unloaded debris on the track and played havoc with the roadbed.

The first intimation of danger came on Sunday morning when the river slipped over its south bank near the home of Mr. MacKenzie. Not anticipating further rise residents of the inundated area made no preparations for moving.

Early risers on Monday morning found the water stealing into the Golden hospital pasture and gradually wending its way southward and westward. By 8 o’clock it became evident that the crest of high water had not been reached and many of the house-holders prepared to seek higher ground.

By noon the water had filled back yards, and finding its way to ventilators soon flooded several cellars. Owners of the chickens found them cut off in the coops and it was necessary to wade knew deep in the icy water to rescue them.

Along some of the streets, the scenes resembled the motion pictures of the evacuation of Louvain and Lillie. Those whose husbands were away from town hastily lifted carpets and other household effects upon tables. Then, taking perishables sought refuge with neighbors more favorably situated.

While the ladies were engaged in this work the men gathered uptown and assisted the C.R.L. crew. Under the direction of Hugh Cornell an effort to save the railroad and traffic bridge was made. All Saturday afternoon the C.R.L. engine had been employed pulling rafts away from the piers of the bridge. On Sunday it appeared that the flood was at its crest, but heavy rain on Sunday night and throughout most of Monday, sent the river to its highest mark since the flood of 1894.

That section of the south side first inundated suffered further on Tuesday, the water cutting a channel near the hospital stables and sending torrents down the streets. Water completely isolating many houses and forcing other occupants to move out. Canoe communication was the only means of reaching many homes.

Tuesday morning saw a slight change of the better, the Kicking Horse falling several inches. During the night the water gnawed behind the north pier and threatened to tear its way into the east portion of the north side business section.

Already the rear of Tuey’s store was awash and the flood waters lapped at the rear door of the Lyric Theatre.

Posted in Flooding
← First Sikh Temple in North AmericaLove in Golden, BC →
Scroll To Top