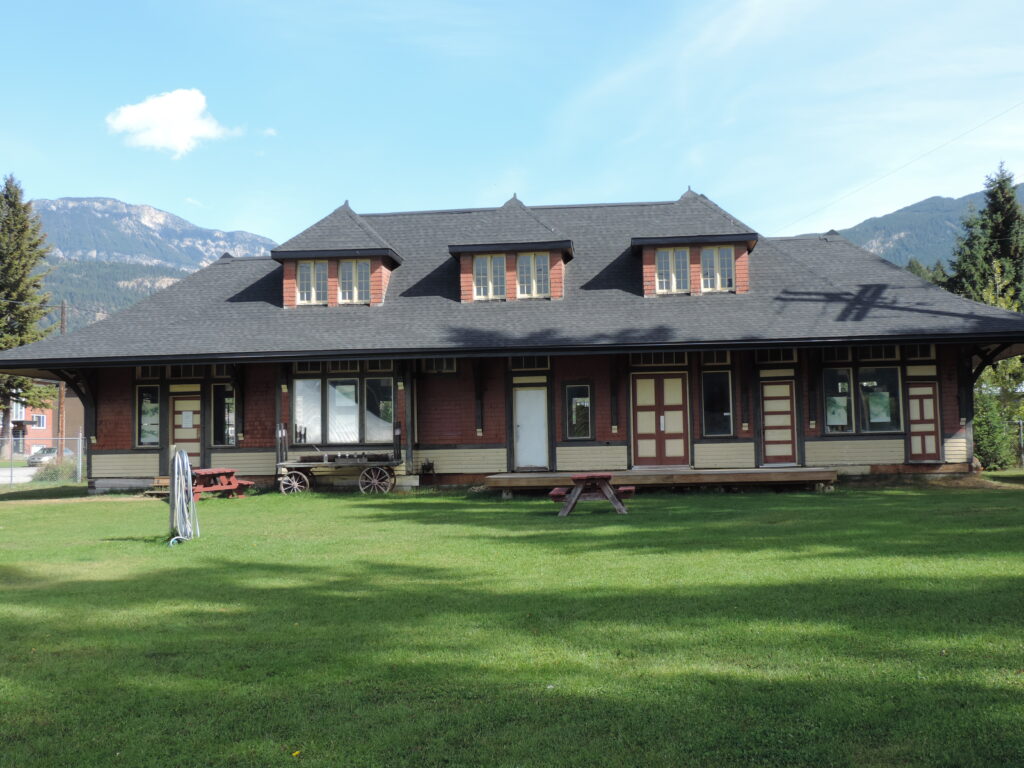 A great tragedy struck the community of Golden on Dec 19, 1942, when between the hours of four and four thirty in the morning, Philomena Carano was pronounced dead by Dr. D.J. Barclay, in the Ladies Waiting Room of the Golden C.P.R. Station. Her husband Thomas Carano, was taken into custody and charged with her murder.

Thomas Carano appeared before Stipendiary Magistrate A.W. Anderson on Tuesday morning, December 29, 1942, charged with the murder of his wife, and was committed for trial at the spring assizes in Revelstoke.

A jury of twelve men was empaneled on Monday, May 24, 1943. Crown Council was Alex McLean, of the Attorney General’s Department, Victoria, while Thomas F. Hurley of Vancouver appeared for the defense.

Dr. D.J. Barclay of Golden, was the first witness called by the crown. He gave a detailed medical account of the wounds that he found on the body of the accused’s wife, Philomena Carano, 49, when he was called to the Ladies Waiting Room at Golden on the morning of Dec. 19, 1942. All together there were 14 wounds, 13 on the body and 1 on the head. According to the doctor, one of the wounds over the heart caused almost instantaneous death.

The next witness was W.A. Talbot, provincial government engineer at Golden, who submitted a plan of the C.P.R. station at Golden. This plan was entered into evidence as an exhibit.

Mrs. Olive Jewell of Golden, was the next witness. She stated that she went to the C.P.R. station with Mrs. Carano that morning, and that it was the intention of the deceased to go to Revelstoke, where she was to work as a housekeeper. Mrs. Jewell stated that while they were waiting, Mrs. Carano’s husband came into the ladies waiting room and ordered her to go home, but she refused, saying there was nothing to go home to. The accused then hit his wife across the face, and Mrs. Jewell said she told him that he couldn’t do that there. Mrs. Jewell stated that then Thomas Carano pushed his wife into the corner, pulled a knife from his person and drove it into Philomena’s mid-section. Mrs. Jewel said she became excited and went into the main waiting room screaming for help and contacted Carroll Armstrong, C.P.R. operator. Later, she stated, she saw the accused hurrying across the tracks and upon returning to the ladies waiting room to the ladies waiting room found Mrs. Carano on the floor surrounded by blood. She then identified the blood caked clothing that was worn by the deceased on the occasion of her death as well as identifying a hunting knife similar to the one used by the accused.

Mrs. Jewell was then cross examined by the defense council. She was asked if indeed Carano had not “asked” his wife to return and not ordered her as stated. Hurley then read from the evidence given at the preliminary hearing, showing that Mrs. Jewell had originally said asked. Mrs. Jewell collapsed in the witness chair and a short adjournment followed.

C.P.R. Operator, Carroll Armstrong was called next. He recalled seeing Mrs. Jewell and the deceased enter the waiting room on the morning of the murder. He next recalled hearing Thomas Carano ask his wife if she was coming home some time later. After a few minutes he heard Mrs. Jewell scream for help and on looking through the ticket window into the ladies waiting room saw the accused, Thomas Carano, with his wife bend over his knee and he was stabbing her repeatedly. On cross examination, Armstrong said he had asked the women if they were going away and that Mrs. Jewell had said no. He assumed this applied to both women.

C.P.R. pumpman at Golden, R.E. Drown was called next and told of Carano entering the pumphouse. The accused had shown Drown the bloody knife, stated that he had killed his wife and wondered what he should do next. Drown said he advised Carano to go to the police. One of the jurymen then asked Drown if Carano appeared normal and was assured that he did, if but a little confused.

Louis Rauch of McMurdo, who was at the station at the time of the murder, was the next witness called. His evidence of the events was the same as the other’s.

Constable James King was the next witness called and he stated that he was awakened by Carano early in the morning of December 19, and that Carnao said to him, “Here is my knife. I have killed my wife, She is at the C.P.R. station.” King said that upon examining the knife he saw blood stains on it. King testified that he had permitted Carano to go home at that time, and that after examining the body and calling the coroner, he had gone and taken Carano into custody.

Mrs. Jewell was recalled to the stand and was still quite distraught so Mrs. Justice Coady adjourned for the day.

Resuming on Tuesday morning Mr. Hurley once again called Mrs. Jewell to the stand. Council for the defense stated that in her testimony at the preliminary hearing Mrs. Jewell, had said that Carano “asked” but that she still considered the accused talk to his wife as an order. Suggesting that the deceased and Mrs. Jewell did not want their presence at the station known, Hurley asked the witness if it was the intention of the deceased to join the other man at Tappen. The witness said no. When asked if she had written any letters for the deceased to the other man, she admitted that she had but denied that he sent any money to Mrs. Carano.

Opening his case for the defense Hurley stated that the defense did not say that he had not committed the offence, but that he was provoked to do so by his wife’s alleged delinquency during his absence at Tranquille Sanatorium. He stated that before he left for Tranquille their 32 years of married life had been normal but that when he returned he found a changed woman, and that repeated attempts to talk her home had failed. Council for the defense stated that at the station, Carano had lost his self control when his wife had refused his pleas to come home.

The accused next stated that he had no memory of killing his wife, that his mind had gone black but that he did remember feeling sorry when he saw that she was dead.

On cross examination, Crown Council read off a list of six convictions against the accused. Several of the convictions were for assault and inflicting grievous bodily harm on his wife between 1926 and 1935. Once again Carano denied taking the knife to the station to kill his wife.

In concluding Hurley addressed the jury for over an hour, stressing that the mental strain under which the accused had labored provoked the accused to the point where he had lost his self-control.

Crown Council in summing up had stated that to that point the defense had been unable to prove excusable provocation because all acts attributable to his wife’s conduct had happened previous to the fatal day.

Finally Mr. Justice Coady spent an hour and a half in his charge to the jury. He pointed out that three verdicts were possible, not guilty, guilty, which automatically convicted of murder, and man slaughter. In the case before them, the accused had not denied killing his wife, so the verdict of not guilty would not apply. If the jury felt that a just excuse existed for the act, then the verdict would be guilty of manslaughter.

The manslaughter verdict would be possible if the jury felt that the person causing death did so in the heat of passion, caused by sudden provocation. Provocation was held to be a wrongful act or insult of such character as to deprive an ordinary person of the power of self-control, if the person acted on the sudden before his passion had time to cool.

The all men jury returned a verdict within two hours with the verdict of manslaughter. He was sentenced by Mr. Justice Coady to serve 5 years in the penitentiary. His time in the penitentiary was cut because of his failing health. Thomas Carano died in Golden, November 15, 1945. At the time of his death he was survived by six sons and four daughters.