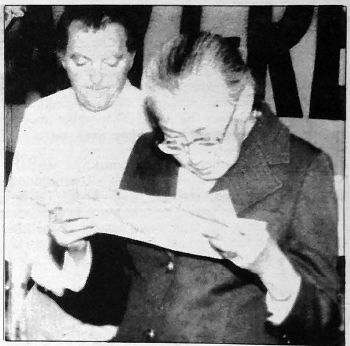 A Wrong Righted at Reunion

A happy little girl ran into the kitchen yelling, “Mother, mother, I’m getting the honor roll.”

She dragged her mother away from her work and trudged over to the Lady Grey School.

“We waited in the back,” recalls Myra Ing, nee Chin Bow.

Waiting, for what seemed like hours, she watched as all the other students received their honor certificates, tied with pretty ribbon, for 1919.

“I wondered when my turn was coming,” she remembers, I knew I was supposed to have an honor roll because I was first in every class.”

Finally, the teacher called her up and told her the Minister of Education had not sent enough certificates so she had bought a book for her.

“The tears were rolling down my face and I walked out of there and went home and threw the package on the floor.”
“I didn’t even look at it,” she recalls, my brother did and it was “Uncle Tom Cabin.”

My mother said never mind but I kept it in my heart.”

Gesturing with delicately veined hands, Myra says, “I knew there was racial discrimination because I was Chinese.”

“You know how it hurts – it wasn’t maybe her fault or the Minister’s fault – but passing from grade six to grade seven was the most important thing in my life.”

“It knawed and knawed in my innards till I’m 76 and I couldn’t forget it,” Myra says, waving a slender hand.

Myra left Golden on 1921 and returned to China with her family, that was the last year of her English schooling.

The tiny lady recalls returning to Vancouver in 1928, with her husband Harry, “I had forgotten all my English with nobody to talk to.”

Myra had continued to correspond in English with her sister who had returned to Canada and she says, gradually English came back to her.

When she received her invitation to the Lady Grey Reunion she checked the Canadian Constitution which opened to a section that stated “wrongs will be righted.”

Peering up, she says, “I called the B.C. Minister of Education.”

“He was too busy to talk to me but I talked to his secretary.”

Sixty-four years later, Myra received her certificate at the Lady Grey reunion on May 19, 1985.

“Sad because my mother isn’t here to see it and happy because I got it.”

Currently, Myra at age 76, continues to take university courses in Lethbridge. She wants to achieve her doctorate.