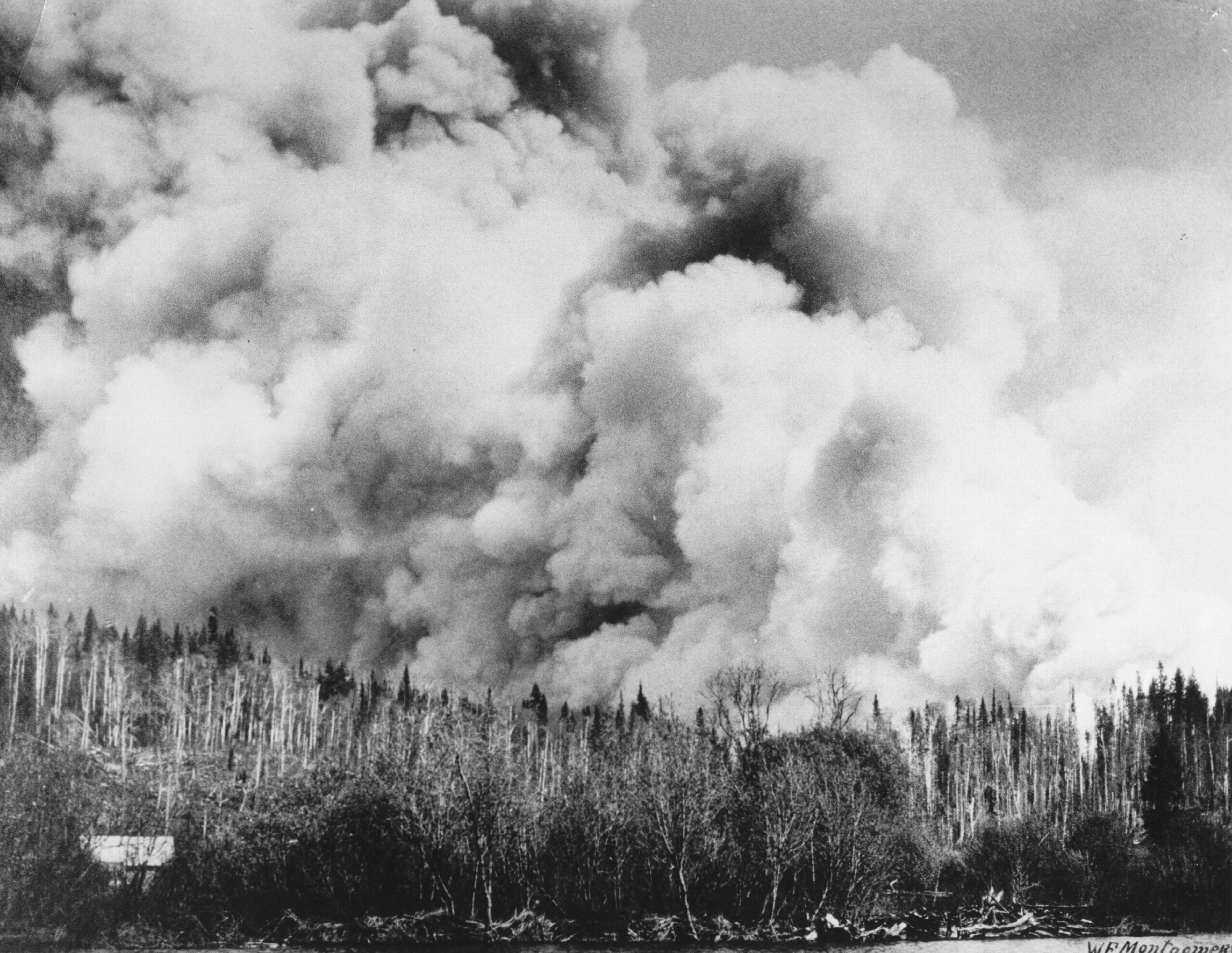 The fire situation in the areas some distance from Golden is quite severe, with huge fires burning large tracts of timber. Here are some of the newspaper reports of fires from the late 1800's through the 1930's that burned close to Golden.

It has been quite a number of years since a really large fire raged in our district – thankfully! The Sue Fire of 1971 was the last large fire of note burning some 30,000 acres of trees in the Donald/Big Bend District.

Fires were a frequent happening in Golden’s early history and here are a few of the incidents reported in the Golden Star from 1895 to 1939.

Bush fires are raging in Moberly area all week.

A bush fire about 5 or 6 miles from Golden has made the atmosphere around the town to smoky to be comfortable.

A bush fire was started on fire on the south side of Canyon Creek, and is still burning. The Columbia River Lumber Co. and the Dominion Fire Ranger all have men fighting fire.

Bush fires are numerous in the district, the worst is directly across the river from the CRL. It has wiped out camps and consumed 2 million feet of logs in its path.

Forest fires raging and several times the townsite was threatened. Every effort was made to keep the fires on the far shores of the Columbia River.

As nearly always happens when the hot weather comes, the discomfort of the high temperature has been added to considerable during the past week by the heavy smoke which has pervaded the atmosphere, drifting in from several big fires which are raging in different directions. A heavy pall of smoke has been rolling up from the south and southwest for over a week, the result of bush fires up the Columbia and in the Kootenay Valley.

Forest fires did considerable damage in this district during the week, no less than seven distinct conflagrations being reported.

The forest fire situation in the district has shown little improvement during the week and has caused no little concern. The fire west of Golden on Wednesday evening crossed the Columbia River below Anderson Ranch and travelled westward.  Latest reports stated that it had reached a point within a mile of Moberly. The fire at the ten mile in the Columbia Valley is still giving trouble. In the Big Bend country near Revelstoke a big fire is said burning.

High winds on Monday afternoon restarted the fires in the Blaeberry district, which had been controlled on Sunday.

Fire which was allowed to gain headway between Glenogle and Cloister has done considerable damage.

Seldom has Golden been more shrouded in smoke that it was during the past few days. The sun and the surrounding mountains were completely obscured and the visibility in all directions was distinctly poor.

The fire on the south side of the Columbia River opposite Moberly is, at the latest reports, still raging viciously and while between 200 and 300 men, comprising employees of the Columbia River Lumber Co., Dominion government fire rangers, will all the assistance obtainable, are manfully struggling to save Camp 5, of the lumber company. Their task seems hopeless. In the words of Matt Holt, camp foreman, “It seems useless for us to stay here, but we’ll make a stand as long as possible.”

The first bush fire of the season started a couple of miles east of town.

The dry weather has been bad for the fire season, there are two at Donald and one at Glenogle.

Bush fires at different points in the district, filling the valley with smoke, as well as ciders, which were falling in considerable quantity.